“If weighed, the total amount of concrete used in the construction of Burj Khalifa would equal the approx. weight of 100.000 elephants.”

FUNNY STORY!
When I was studying in Trondheim back in 1652, I was in a group that worked on marketing the huge cultural festival we have up there every two years. Through my best friend, Andreas, and through that group I met Hege. This was 15 years ago and while we have each other on Facebook I haven’t talked to her all that much in the past years (unfortunately). All of a sudden I received a text from Hege saying “You said you were going to the Emirates. I’m in Dubai until the 11th, let me know if you wanna meet up!”

I needed no prompting. We proceeded in having two great days together going up Burj Khalifa (with her friend, Gro), window shopping in Dubai Mall, visiting the aquarium and checking out the older part of Dubai (with the souks and all). I had a great time catching up with Hege, it felt pretty much as if we’d been in steady contact since Trondheim. 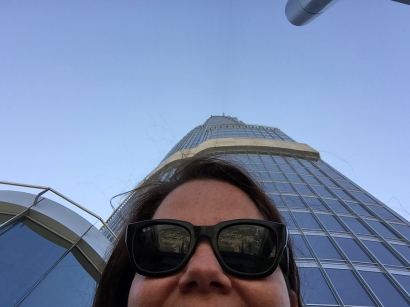 Still a ways to go to the top 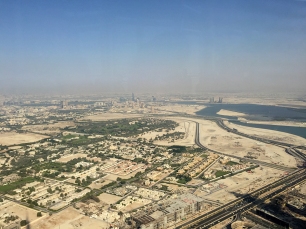 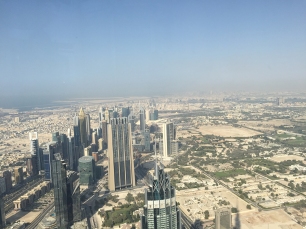 The Dubai Aquarium is located INSIDE Dubai Mall and relatively easy to get to. They boast that “The 10-million litre Dubai Aquarium tank, located on the Ground Level of The Dubai Mall, is one of the largest suspended aquariums in the world” and it is quite impressive. The thing is, when you’re done walking through the tunnel under the tank you have to exit the aquarium, take the escalator up a floor or two and find the entrance to the Underwater Zoo to experience the rest of it. We found it, but I wouldn’t call it the most user-friendly…
Worth it though! We had a good time, saw a lot of cool stuff, including King Croc the 750 kg crocodile(!) He. Was. Huge. I was thoroughly impressed. I was unable to get some good shots showing his size though 😦 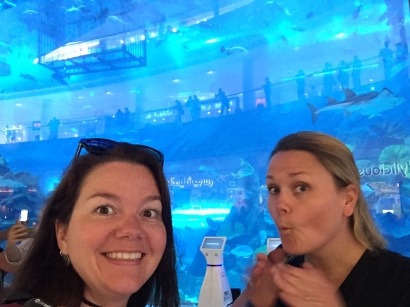 Let me get excited!

Wha the hell is this??

Me and ol’ Jaws over here 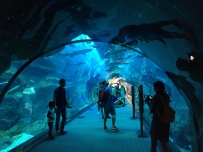 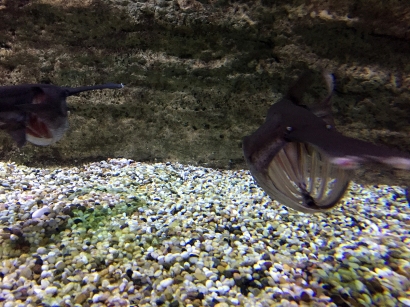 And what the hell is THIS? 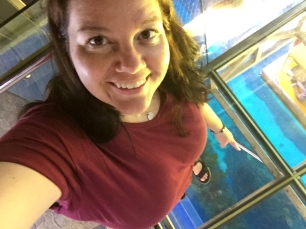 Standing on glass looking down

Glow in the dark scorpion… Casual…

You can also see the lit water and music show outside the Burj Khalifa at night for free. They run it about ever half hour or so from around 6pm. The first one we saw had some great Arabic music to the splashing water. The second round played Enrique Iglesias’ “Hero” *lol*
The light and water with the massive Burj Khalifa towering in the back though. It was quite a spectacle. 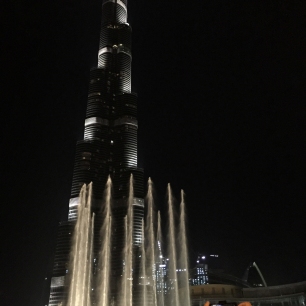 Water and music show outside the Burj Khalifa

Water and music show outside the Burj Khalifa

The contrast between Dubai Mall and the souks is insane. Dubai Mall is basically the most posh shopping mall I’ve ever been to and they sell all sorts of high priced luxury products. The souks sell you stuff you hope is real for the best price you can haggle it to. Felt like I was back in Africa…
At the mall we fond all sorts of stuff we will never need. In fact, the only thing you can’t find at the mall is the exit. Any exit. I firmly believe they built them like this so people will keep shopping ad infinitum 😛
We tried out some awesome hats at this weird Japanese shop we found though. The whole shop had everything you could ever need to decorate for a really tacky Christmas and then some. I saw the inside of that shop and I just thought: “Wow…” Just when I thought Dubai couldn’t get more insane they throw in some standard “crazy Asian vibes”. You gotta love it ;-D 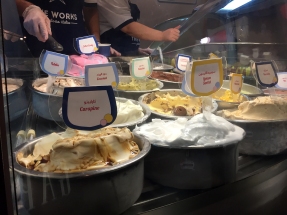 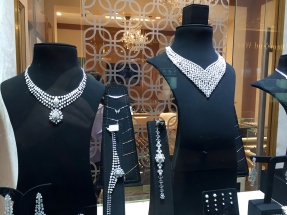 I’ll have three of these, please

Yeah, me too right now

Now, these are all things I would recommend you do if you ever visit Dubai. If you only have two days, this is a great itinerary. It wont wear you out and you get to see the most important tourist attractions, BUT you also catch a glimpse of what Dubai is behind all the golden buildings and glamorous settings. Old Dubai felt much… well… older. The street vendors flogging their wares, the street food (which we didn’t try, mind you), the haggling and the noises… And the 1 Dirrham boat ride over the river. (That’s $0,27, guys).