“If destiny does not fit you, fit yourself to destiny.”
– Arab Proverb

Before my massive picture and text bonanza, here’s some of the stuff I learned after two days in Petra:

I’m thinking this is completely unnecessary, but I’m going to say it anyway: If you only have two or three days in Jordan, you should get a car or get someone to drive you to Petra (town) so you can spend one or two whole days at Petra (the old stone town).
Apparently, there are people who, unlike me, have not had Petra on their Bucket List for the past millennia…

So here’s my itinerary for two days in Petra (some of it with Ben and Basil from the Egypt-trip) and where I went and walked. I had only a vague idea of how it looked before I walked in there myself, but you don’t need to pour over maps and information beforehand. I would recommend getting a guide for the basic tour, about $50 for about 3 hrs (unless my memory fails me) which is plenty of time to go from the gate, through to the Treasury, the royal tombs and down to the Byzantine Church. You can find the Monastery and the High Place of Sacrifice on your own and all of these can be done in one day (Ben & Basil had to hurry a bit, but they were leaving at two o’clock the same day).

DAY 1
I got there before the guys so I bought a two day ticket to Petra and spent the day there before we joined forces for the night-spectacle. Like I said, it’s about half an hour’s leisurely walk from the ticket office to the world famous Treasury, (the building everyone thinks of when they hear “Petra”).

The famous Treasury Building in Petra

The walk itself is quite enjoyable in October. Straight out of the gate you see rock formations and old carvings, caves and tombs, but I have to admit that for me all this was a small bonus/build up to reaching the Treasury.
In the two days I spent at Petra I walked to and from the ticket gate three times, so I got to check out the details. That didn’t stop Ben and Basil from completely owning the pop quiz our guide hit us with on the second day though. I hate those guys 😉 (See you at your wedding, Basil!)

Anyway – I had much the same feelings as Basil (and perhaps Ben, I forgot to ask him this). Parts of Indiana Jones and the Last Crusade were filmed here and ever since watching that film the mystery and awesomeness of Petra made its way to our Bucket Lists. I remember touching the stone walls of the ravine walking down towards the heart of Petra and the next day Basil did exactly the same. It’s obviously not just the two of us though. The place is special to a lot of people, that was evident in the atmosphere… (Naturally, some of the atmosphere f ex in front of the actual Treasury is somewhat lessened by salespeople and the hundreds of tourists taking pictures, but if you manage to find a quiet place to yourself, like I did, it’s quite magical).
I managed to spend almost 1,5 hours in front of the Treasury just enjoying the view, contemplating life, listening to Sting on my iPod (it helps enhance the mood when there are billions of tourists around you) and fighting of salespeople and guys wanting to guide me everywhere (can’t blame them for trying though). 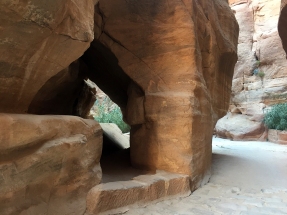 Heading in the ravine to get to the Treasury 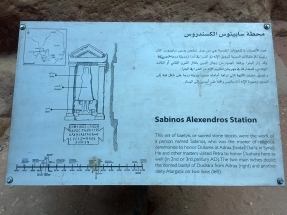 There are in facet informational plaques!

Fascinated that just the legs remain…

Some people just have to… 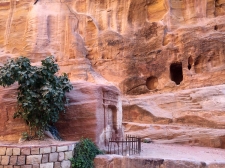 Carvings, buildings, colours… So much to take in. 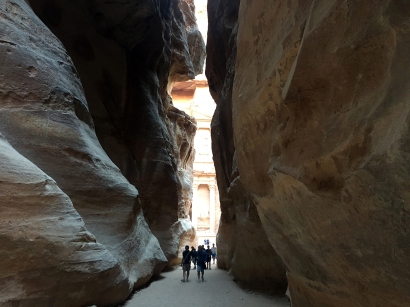 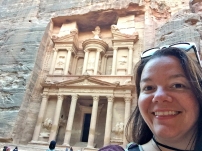 After all these years I’m here. It’s surreal, no lie

Camel is not impressed…

The whole place is fascinating, like what the hell is this for??

After that I walked down towards the tombs, but only made it past the first bend before I saw an alluring little stone staircase up the mountain. I ventured up there, had my lunch on a fabulous, huge rock in the shade and got to talking to a woman coming down the way I was going. I had seen her start, talked to some people higher up and now she had obviously changed her mind. I asked her if there was nothing up there and she panted: “Yes… but woooh! So many stairs! So much climb… I go back down.” I thought about it and figured I probably wont come back to Petra (let’s be realistic) so I thought I’d give it a go anyway. Basil’s words were in the back of my mind still: “You’ll get there a day before us, you have a chance to see the sunset in Petra!”

I’m going up there! 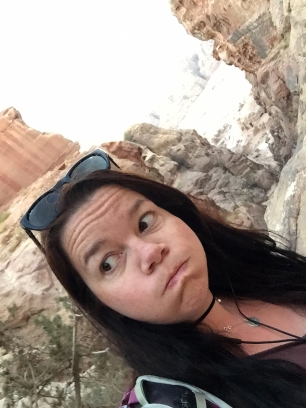 Getting there, almost missing the sunset here, guys!

Getting there, almost missing the sunset here, guys! 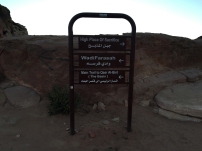 I’m glad they signposted the way, no joke…

Long story short, that staircase wasn’t actually that strenuous. I mean, it was for Basil, cause he ran out of time and literally had to run up it and then back down, but I had all the time in the world to get there so I took my time and enjoyed the exercise (yes, really). I was enjoying the sunset at the top so much I forgot to take pictures of it. And before I knew it I came across a group trying to find their way back to the gate, going the other way and I thought “that would be interesting, I get to see the other side too”… Yeah… One hour later there we were, me, three Romanian women and an Asian couple being guided by a local Bedouin and his donkey, Shakira(!), through the desert of Petra. It was pitch black and we were climbing steep and stony hills up and down like we wanted to kill ourselves. It was great! The only bad thing is I wrecked my knee a bit again, so I opted out of the Monastery trek with the guys the next day.

After returning, (in the dark), I met the guys for dinner at their hotel and then we headed out to see Petra by Night. I had read a lot of comments saying this was an absolute waste of money, but I we enjoyed ourselves. It was pretty much what I expected, lanterns lit up the way to the Treasury where we all sit down and enjoy a cup of tea while locals play he flute and a guitar-like instrument I can’t remember the name of. After which the Treasury is lit up in different colours and none of us had a camera capable of capturing it well enough. It might not have been magical, but it was worth it. 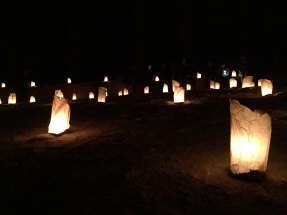 The lanterns guide the way 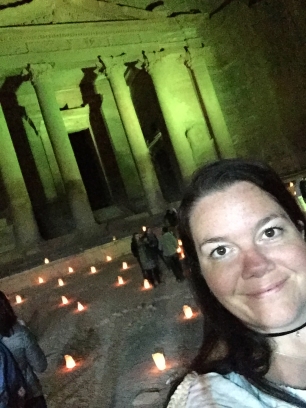 DAY 2
We met up with our guide who took us around Petra telling us about the facts and theories (of which there are many!) of the many caves, monuments and buildings that have been discovered in Petra. We were quite happy with our “basic guided tour”, it was somewhere along the lines of 3 hours, I think, and we covered the parts I feel you need a guide for. He was also pretty adept at taking photos for us (as you can see from the feature image for this post).

After we said goodbye to the guide Basil and Ben went off to see the Monastery while I went into the ruins of the old Byzantine church. If you have the opportunity to see the Monastery I would definitely recommend it, based off of what the guys told me and the pictures they showed me. It’s basically a bigger version of the Treasury and quite impressive. The church and Great Temple can both be seen on the way back to the Treasury (or you could do the Monastery on the second day, the opportunities are endless!!1)
I met up with the guys again at the Treasury and we said goodbye for now as they were heading to Wadi Rum and I still had two days in Petra town. I managed to spend another hour in front of the Treasury before heading out for the last time. 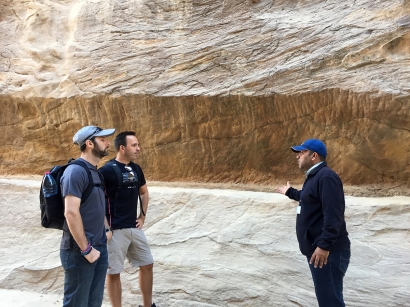 Ben, Basil and the guide

Excavated building… We’re not sure what it was 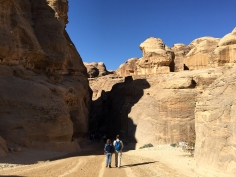 Not too many turists yet

Rock formations and colours… I can’t help it, I find everything interesting 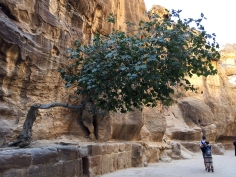 And here we go again!

I got to live it again through Ben and Basil

The guide was adept at taking picture

The top of the Treasury 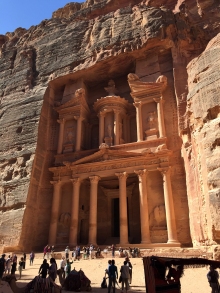 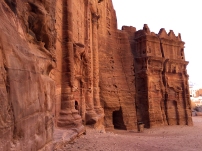 A whole city in the stone 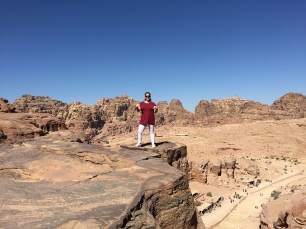 The guide found us a ledge 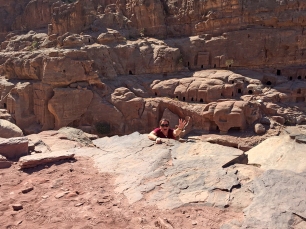 I found another ledge (thanks for the pic, Basil!) 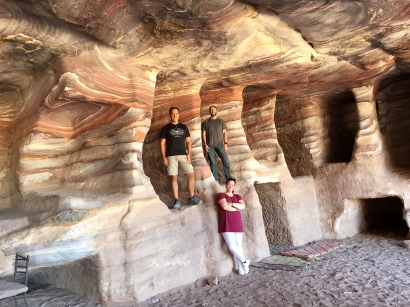 The band, now only three members

Royal tombs in the mountain 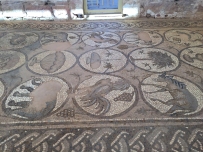 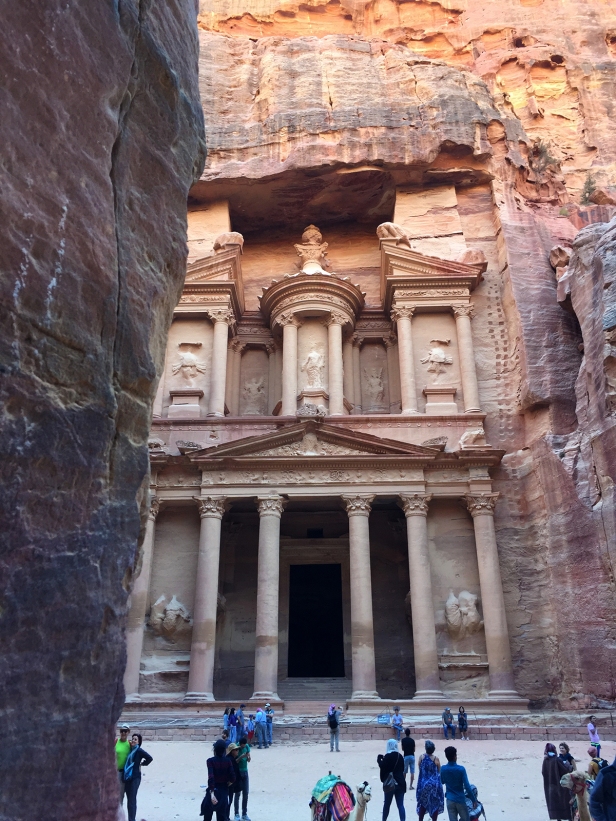