“New York may be the city that never sleeps, but Shanghai doesn’t even sit down, and not just because there is no room.”
– Patricia Marx

What can I say about Shanghai other than it has 50.000 % more colour than Beijing, 60 % more night lights, and the Bund.

I wanted to go to Shanghai because Rachel and Jess had been bigging it up for 5 solid months while we were English teachers in Hohhot. I got Tiril on a train for “a few hours” (this was not the 23, 8 hours train ride though, we saved tat till last cause we’re speshull) and the very next day (“YOU GAVE IT AWAYYYYY”). No seriously, the very next day we awoke in Shanghai ready for shit to HAPPEN.

The heat happened. It was so hot and humid it felt like one of those movies where that fishman takes your hand so you can safely walk around the bottom of the lake… Except the lake is right next to a volcano and you’re worried he’s gonna see that hot mermaid over there and immediately let go of your hand…

Almost like that. Anyway, we thought it best to stay at a hostel with no windows, because we were still speshull, so we got this great place next to a restaurant that served all sorts of fancy dishes (including salt with a bit of bacon on it), where the staff were amazing and the Asian girls we shared the dorm with set the air con to a frosty 26 degrees Celsius for the night… That’s 79 degrees Fahrenheit for you American nerds out there. I woke up not able to breathe as I was already struggling with my constant and insane state of being diseased since working in China for 5 months. It got so bad I sent Tiril a text message right there in the middle of the night. Can’t remember what it was, I probably thought I was dying. 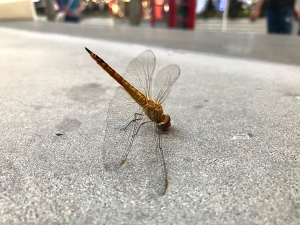 Shanghai so hot the insects faceplant

Anyway! We were talking about the city, not the hostel… Shanghai is beautiful. It’s vibrant day and night in a way I never found Beijing or Hohhot to be, and I’m not just talking about bars and drinking. The colours are amazing, the lights at night mesmerized me and it was totally worth wrestling with 79.000 Chinese tourists to see The Bund (riverside) light up at night. We even got a bit of a Doctor Who moment getting the Bund Tunnel tram thingy… what’s it called? Hang on, I’m consulting my scrapbook…

I’m stupid, it’s actually just The Bund Sightseeing Tunnel. They’ve created a sort of light show wit various figures and stuff in a tunnel taking you under the river. Despite the fact that I’m not really selling it, I would recommend going, it was beautiful. If you have kids they’ll definitely love it. I’m a big child, it is known. 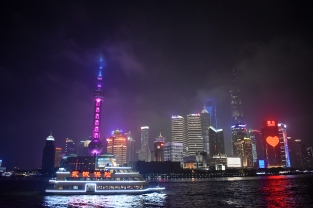 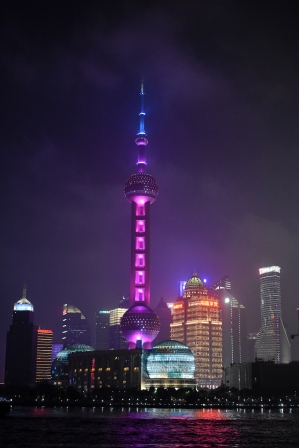 I bought another souvenire, a mini puzzle, cost me $2,5 and we nailed it almost quickly kinda! Well, we nailed it kinda, then got it a bit wrong, THEN got it 100 % correct. We’re still pretty speshull.

We did a puzzle

We also decided to take a trip up in the Oriental Pearl Tower, the TV tower in Shanghai.  think Tiril described it best when we (finally) got out of there: “That was a bit more extensive than that ‘quick trip up the tower, check out the view and come back down’ that I had imagined…” 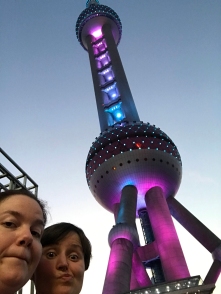 My life’s dream is fulfilled

Sick of standing in line much…?

We hung out up there for quite a while (mostly because we were afraid that if we went back down they’d put us back in a line again) and then spent about ten minutes on the observation deck before we called it quits and left. What an absolutely exhausting tourist attraction, jesus.

One awesome thing is the see through floor they always have. Tiril doesn’t enjoy stuff like that at all, but I do! So I went for a skip and a jump and a video of the whole thing ❤ #ItsAGoodDayToDie 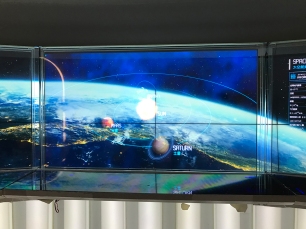 After that it was more eating, general city sightseeing and random stuff going on. Tiril bought cheap shoes, I tried on every hat and pair of sunglasses in the whole of Shanghai and we had ice cream because without it life is void.

Also we found Sauron and his minion Gollum! #LOTRMania

But I bought this!

Does the carpet match the drapes? In a hat-shirty way? 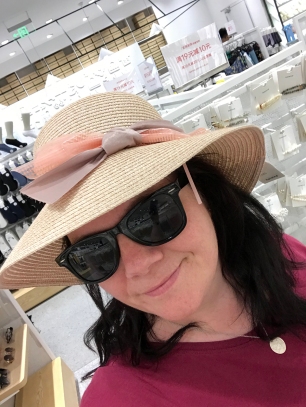 But I bought this! #Germanyyy