No one: “There’s no way to be any geekier than me ever, in the world, at all.”
Annie: “Hold both my beers.”

I did it. I splurged and went for a full day “Hawaii Five-O Tour” WITH LUNCH AT MCGARRETT’S ACTUAL HOUSE(!!!), because money is transitory and fandom is forever.

I had watched some of the original series back when I was a kid, but it really picked up for me when they made a fast paced, high energy, action flick remake in 2010. There are some pitfalls here and there, but in general the series is really good and showcases one of my favourite places in the world on a weekly basis, (with a lot of badass female characters too) so what’s not to like.

I got picked up early in the morning at Ala Moana Mall (which apparently is THE pickup place for all tours this side of the island) and after our tor guide, Sean, had gathered all five passengers we were off. Pretty happy this was a small tour (also explains the $169 / NOK 1550 price, but hey). We started the tour immediately with Sean explaining certain scenes and behind-the-scenes facts to us, as well as showing videos from the show on the monitor while we were driving.

Our first stop was at the Kahala Mall (Waialae – Kahala area) to check out the bust of Jack Lord, the actor who starred as the protagonist “Steve McGarrett” in the original series (1968-1980). 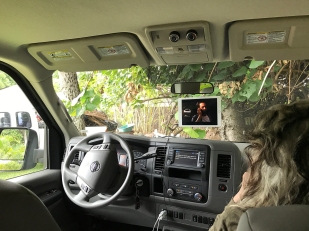 Showing videos along the way 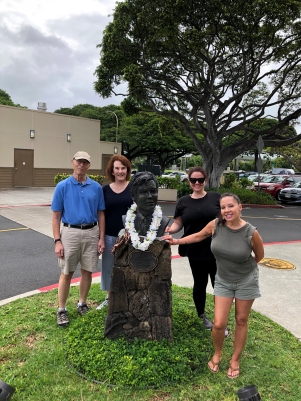 Then we stopped at a lovely lookout site where they had filmed some important dialogue scenes and I completely forgot to take photos because the whole group just geeked out and discussed the show while enjoying the view for about ten minutes.

Our final destination and where we would be spending several hours was the location for main character, Steve McGarrett’s family home. The producers had chosen the Bayer Estate (which they pronounced like “bear”) in the Aina Haina neighborhood. This place might not look like a mansion, but with two roomy floors and a nice garden that stretches straight out into the pacific I can promise you it doesn’t come cheap. I have no idea what this place would cost today, but I’m fairly sure I don’t know anyone who could actually afford it. 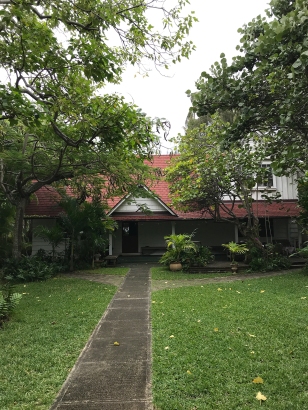 We went straight around to the back where the two lounge chairs (or exact replicas) of the chairs Steve and Danno usually sit in when they have a quiet moment where placed overlooking the sea. Guidemaster Sean goofed around showing us where Steve and Danny had dug the massive hole in the lawn when they had to bury the investment money from Kamekona for Steve and Danny’s restaurant. He got some cash out for reference… Only about $999.999 short.

We sat in the chairs together and alone and took way too many photos (no, really, this time I mean it. WAY too many photos) – there was no rush and no “moving on” from Sean, which contributed to making us feel like we were on the best tour ever. Five absolute geeks allowed to immerse ourselves completely and place our asses exactly where main characters asses had been. Perfect. 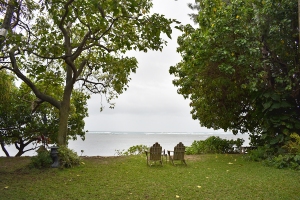 THE GARDEN WITH THE VIIEEEEWW!

I can practically feel Steve and Danno

Sean used two lifesize photos affixed to cardboard of Steve and Danny to place around the photo ops too, it was as hilarious as it gets for people way to invested in a TV show 😉

“The Bayer Estate belonged to a high official of Alex & Baldwin named Carl Bayer. He was instrumental in formulating the Chamber of Commerce on Kauai. When he moved to Honolulu with his wife, he had a famous architect design this house in 1936.”

We sat down for lunch and during the meal Sean went through more information about the show and the behind the scenes stuff – I didn’t know it took between three weeks to a month to create an episode (from scratch, that is).

When the show and tell / lunch was done we got to go inside the house and see it for ourselves. The owners, (Richard and Sooz Mirikitani), were there that day (which doesn’t happen every tour) and they had brought their dog(!) His name was Yogi (because of the Bayer “Bear” Estate) and Sooz was training him to sniff out invasive species of plants and fungi (I think). They gave us a demonstration where Yogi found a piece of plant behind the sofa cushions (he seemed like a bit of a sofa liking dog, but at least he went for the plant before taking a nap).

The Bayer Estate was used extensively for the first, few seasons with the cast showing up at McGarrett’s, celebrating holidays there, break ins happening etc etc, but the logistics of it became too much and they finally made a replica on a studio lot and started using that for all the interior shots. Not sure when exactly that happened, but they changed the kitchen up a bit… It’s been so long since I saw the first seasons I couldn’t really remember the differences, but they had overviews placed for us to see.

Afterwards we were given some “free time” to explore the house and the grounds. After photographing everything I could see I went out back again and sat in the chair just to “feel the place”. Looking out at the Pacific Ocean remembering episodes of the show and thinking again “what even IS my life right now?” ❤ 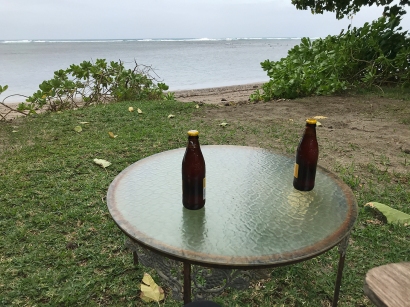 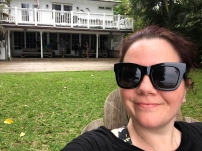 Finally, we said goodbye  to Sooz and her husband and Yogi followed us out to the porch where he promptly plopped down and had another nap. What’s the English word for “bedagelig”? Leisurely, says Bing… Sounds about right. 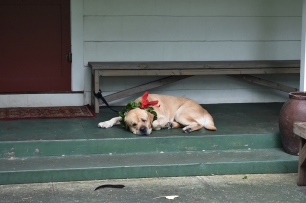 This would’ve made a great finish, but on our way back to downtown Honolulu, Sean took us by Hawaii Five-O Headquarters: Aliʻiōlani Hale (where the Hawaiian Supreme Court resides now). (See my post from 2010 here). 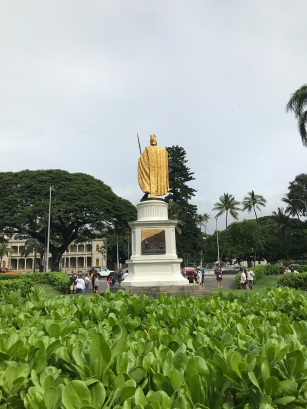 The exterior is used as outside shots of the team’s HQ. I was here back in 2010 when our guide, Nancy, took us there after spending a whole day doing a Pearl Harbor tour. I have a picture of me hugging the wall from back then – Naturally, I did the same thing now. Things must come full circle, people! 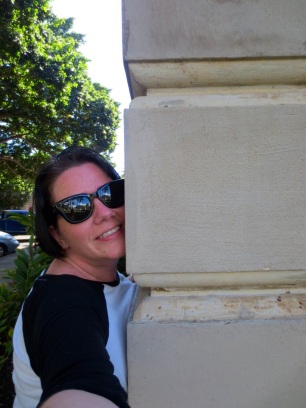