The train from Taipei to Kaohsiung (not high speed) takes about five hours and the trip i quite scenic. If you avoid weekends and peak hours you are pretty much guaranteed a window seat too, and the ticket sellers are more than happy to accommodate your wishes.

I met Xiping in Nagasaki, we stayed at the same hostel and just started talking. When I heard she was from Taiwan I said I was going there and she told me to come see her in Kaohsiung. So after spending a few days in Taipei I hopped on a train south.

Kaohsiung is a really nice and relaxed place. It’s not small enough to walk everywhere, but like Taipei they have a highly functional metro system which is super simple to use (and again, the people at the information desks and ticket counters are so helpful and cheerful there is nothing that is a problem). I got an Easycard at the Taipei Airport which is like an Oyster card (UK), Octopus card (Hong Kong) or any other card that works on public transport where your frame of reference is from, and it is valid for the systems outside Taipei too, so I just walked in, swept my card like a pro and went anywhere I liked. Ain’t no freedom like the metro freedom.

First off, this was the place I celebrated my birthday this year. Kaohsiung, Taiwan. So far the most exotic place I’ve had my birthday cake. I ventured out of my hotel in search of a bakery for this special day – I have to have cake. It’s a must. I found some on Google Maps, but you never know if it’s the right bakery until you see the cakes. Oh no. Important decisions are to be had. Luckily, Kaohsiung had a mint bakery with a gorgeous chocolate cake ready to go. And it was the perfect size too! Like, it was -a whole cake-, but it wasn’t humongous, so given a little time I would be able to manage it by myself. (I mean, you don’t -throw away- chocolate cake, guys… seriously). Also, I had a small fridge in my hotel room, so storage was sorted.

On the prowl for birthday cake!

Iz it any gooood?

PIER 2 ART AREA & CIJIN ISLAND
I met up with Xiping for lunch/dinner and a guided tour of Kaohsiung. First we went to eat at a restaurant she loved (that didn’t even have an English name on Google Maps, so I wouldn’t have found it myself). I had a local delicassy called “Milkfish”, some of the most savoury and tender fish I’ve ever had, so nomz… Then we went to see her brother Lee compete in darts at a local mall, where I also met her shy, but lovely mother come to support the dart prodigy (he won 3. place in the end). We decided on the mall to begin with because it had air conditioning.Even Xiping thought it was way too hot this day, which should tell you how hot it was for me 😛

After the mall we went to famous art area “Pier 2”, which is definitely a must if you’re in Kaohsiung. It’s super artsy fartsy, but they have so much cool stuff there, from cafés to restaurants, to artwork galore, to a state of the art cinema. And the hyper modern “above ground metro train” runs straight through it. We spent quite a while just wandering the streets and the pier enjoying the sights and I even found a Transformer! Day made.

After the Transformer incident we used our Easycards on the local ferry and took a ride over to Cijin Island, a popular getaway for locals and tourists alike. Cijin has everything, party places, the beach, food stalls, souvenir shops (also galore) – everything you need for entertainment for the day. I ended up buying a stuffed puffer fish on a string for my Christmas Tree. I hope it doesn’t break, it seems “slightly fragile”…

One of the things I remember best from this night is… Well, if I’m honest, it’s the smell of the stinky tofu… It smells like someone died 7 weeks ago and then got buried in their own sh*t… It’s not good. I actually didn’t try eating it while I was there. I’ve heard the taste is nothing near bad even though the smell is, but.. I just didn’t feel like it. I’l live with missing out on that one.

I didn’t try that either… 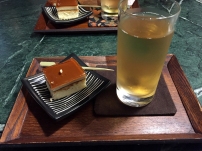 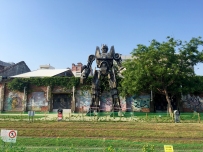 “Mooore than meets the eeeeye!” 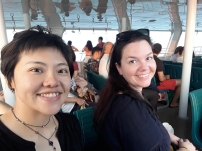 On the ferry to Cijin

On the ferry to Cijin

I dyed my hair for my birthday 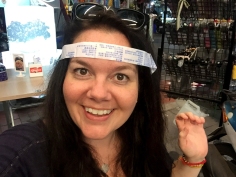