“Being sober on a bus is, like… totally different than being drunk on a bus…”
Ozzy Osbourne

Ok, so… This is where I state something obvious like “travelling across the African continent takes time, cause it’s so big and stuff”… Once again I wish I had some newfound, mindblowing wisdom to share with you that I picked up travelling from Victoria Falls to Cape Town, but the thing is, I didn’t really discover anything that I didn’t already know or expect. It’s a long journey to undertake by way of wheels, the make up and flexibility of the group you travel with is imperative, if you can read in the car without getting nauseous that helps a lot and music is a must, bring your iPod/phone. In fact, the only thing I “learned” is that in Namibia the roads are so poor in places that everything heavy needs to be put in the lockers in the back, NOT in the overhead rack. (We got told this by Mama Thandi, by the way, so luckily no one was hit by a 5L water can)…

The company I chose to travel with was Nomad Tours mostly because of the itinerary of their “Vic Falls to Cape Town“-tour. They checked off close to every single thing I had on my “must do”-list for Botswana and Namibia, so I signed up for the three week camping tour. The deal is you travel by truck/bus from place to place and put up/take down your tent “like a nomad” for every stop. I’m a lazy person. No, I’m a -really- lazy person, I can’t even pretend… Next tour I’m doing is accommodated, no joke. I didn’t hate the tent, but I didn’t like it either. I’m not the sort of Norwegian that packs my backpack and my tent and heads into nature for a couple of days. I go on day hikes, I like them, they’re therapeutic and really good, but screw the tent. Seriously. So to sum up: I found the three weeks on tour to be enjoyable, fun and perfectly lovely, but it wasn’t -because of the camping-. 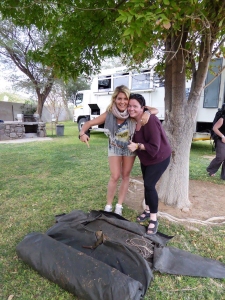 Although, when we got the hang of the tent, we were VERY proud indeed ;-D

Anyway, Nomad name their trucks after artist. We ended up in “Mike”, which Mama Thandi said was short for Michael Jackson, but we saw another Nomad truck called “MJ”, so we’re a little unsure here, guys… Mama Thandi might have made a mistake. Warm thoughts to whoever can help me out and suggest other artists named “Mike”.

My “home” for the three weeks on the road…

We started out with a group of six people: Genevieve & Vincent (Canadians), Anita & Christoph (Germans), Patricia/Trish (Swizz) and me. We quickly got to know each other, inevitable when spending much time in closed space and experiencing Africa together. Countless hours playing cards and drinking wine later, we said goodbye to Trish in Swakopmund where she got off to return to Switzerland and Sophie, Nicole (Germans) and Aline (Belgian) joined us for the remainder of the tour all the way to Cape Town. Sort of a “hop on-hop off”-thing with Nomad, flexible system. S-M-R-T. 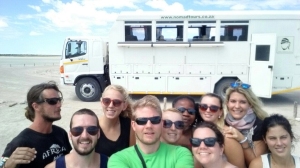 Almost the whole gang in the Etosha Salt Pans

I’m gonna add this little clip to show how close a lioness came to us during a stalk (yeah yeah, I couldn’t find a smoother way to transition into it, ok?) She wasn’t interested in us, but used our car as an obstacle trying to keep the warthogs from seeing her. She was literally one meter from us, so the hearts were pounding. Even after working with lions for four weeks I have to admit it was incredibly cool to see a lion stalk and hunt in the wild like that! (Thanks for the movie, Christoph!)

But since pictures say more than word (apparently), I’ve divided mine into categories. So on a tour like this you’ll see a metric sh*t ton of animals in the wild, you’ll make great friends and you’ll catch so so many of those gorgeous African sunsets… In addition, if you’re really unlucky, you’ll get injured. Aline took a tumble in the Sesriem Canyon and injured her leg. Luckily an x-ray showed no fractures, but she was reasonably handicapped the last three or four days of the tour, so… (She’s back home now and was doing fine the last time we texted, so we’re hoping she just needs rest)

Anyways, for the rest of us who weren’t so unlucky (it wasn’t a big fall or anything, seriously just a tiny split second wrong step there, bad luck all around), this is some of what the tour looked like. (Thanks to Vince, Gen, Chris, Anita and Trish for extra pictures. I’ve stolen some of yours guys, forgive me). Click the pics for bigger ones. It’s magic. AND hover over the pictures, minions! For some of them have comments!

MIKE AND THE ROAD

Lunch by the road 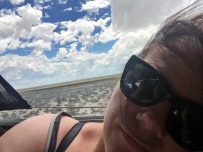 Wake me when we get there…

Even the campers can enjoy the lodges’ facilities

Are we there yet?

Sharp contrast to the view from the road…

We played cards a lot. Asshole and Shithead. Yup… 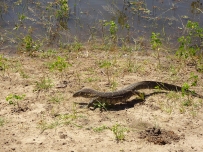 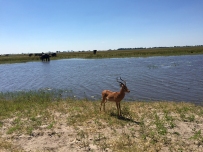 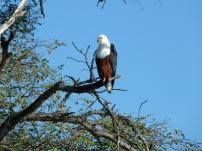 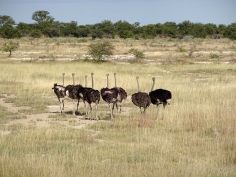 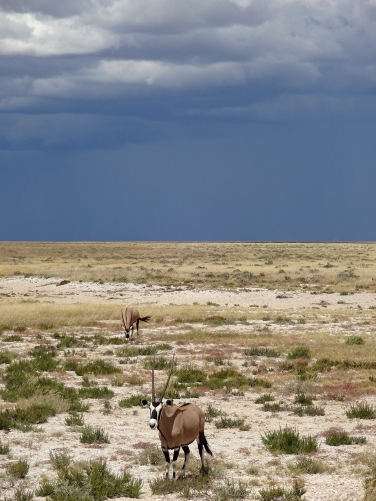 Mokoro trip in the Okavango Delta 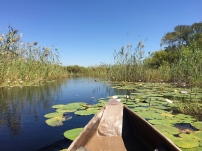 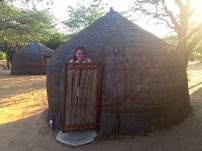 Can I upgrade to this little cabin? 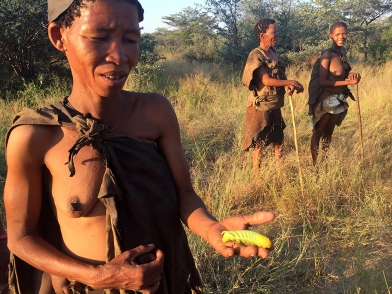 Even the guide didn’t know what this bug was

National Museum of Namibia (aka the Coffee Machine) 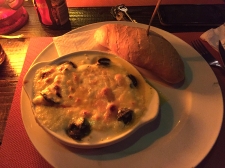 I tried snails. They were delicious. 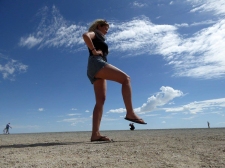 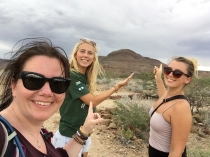 Spitzkoppe, the Matterhorn of Namibia 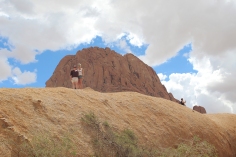 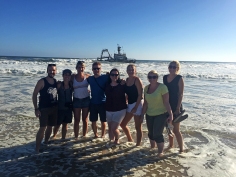 The Shipwrecks of the Skeleton Coast of Namibia

Gettin’ that sand off before I get back in Mike 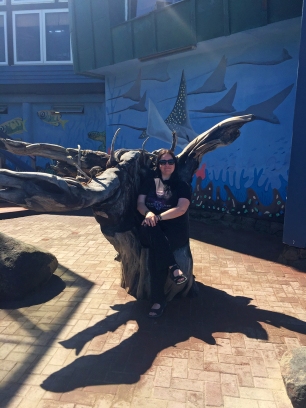 Swakopmund had my throne ready

The Tropic of Capricorn (it’s the southernmost latitude where the sun can be directly overhead. Its northern equivalent is the Tropic of Cancer)

Genevieve with an Oryx horn

My new German friends I randomly adopted on top of the dune (Anna & Wolfgang, SCHNELL!)

Nicole and Gen on Dune 45 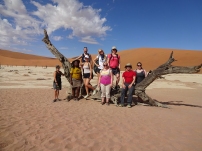 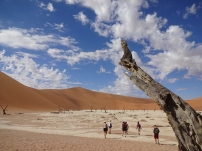 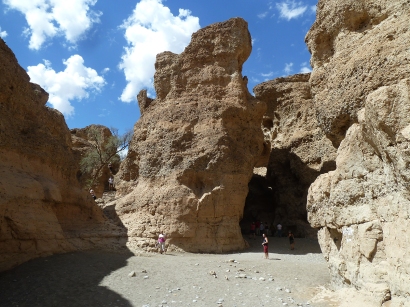 Sesriem Canyon before The Fall

Sesriem Canyon before The Fall 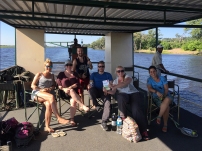 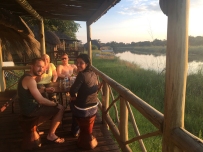 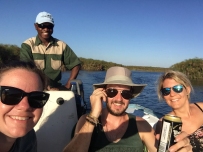 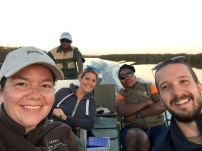 “Immature is a word boring people use to describe fun people.” 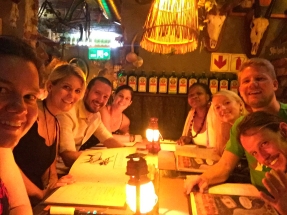 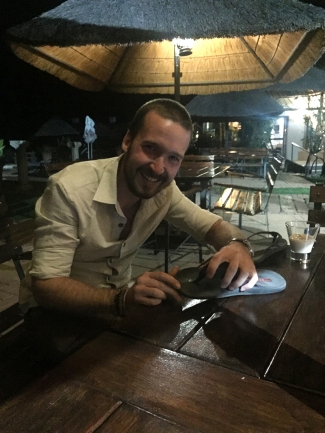 Who’s wine is that, Chris? 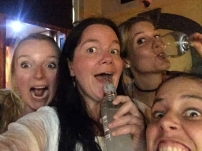 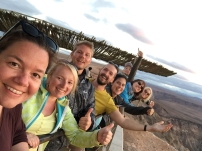 Thanks, Vince. This is the bect picture so far.

Okavango Delta sunset on the boat ❤ 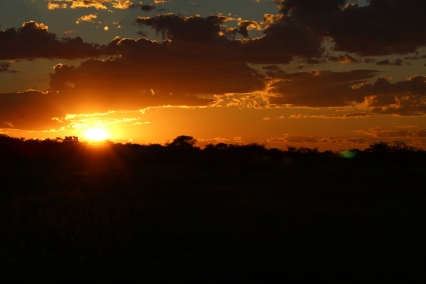